Keeping watchdogs safe 2: An engaged public is the ultimate line of defense 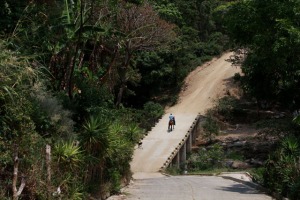 El Caminito, the cocaine transit route used by the Texis cartel in El Salvador, begins in the poor village of San Fernando in the province of Chalatenango. (Photo by Frederick Meza, courtesy of El Faro)

We live in a new world of news, writes Frank Smyth, senior security adviser to the Committee to Protect Journalists. “News organizations that publish primarily or entirely online are now in the thick of front-line, in-depth journalism.”

“With the attention,” he continues in an introduction to CPJ’s extremely helpful  Journalist Security Guide, “has come risk.”

Around the world, a new breed of news online-only news organizations has emerged. They do some of the most exciting and innovative watchdogging work. They are small, feisty, independent. They don’t compete in the breaking news arena but focus on holding the powerful to account. The Internet has given them a platform for disseminating their work and engaging their audiences. It has amplified their voices and given them influence and clout. But they are also vulnerable. Without the resources of large news organizations, they are mostly left on their own to fend off legal and security threats.

Last November, at the launch of the Columbia Global Center in Istanbul, we brought some of these organizations together in a day-long meeting. There, bloggers, editors and reporters from Africa, Asia, the Middle East and the Caucasus talked about how dangerous exposing wrongdoing can be, especially in countries where the rule of law is weak and there is little tolerance for a critical press. They described how new technologies have given them unprecedented access to information and allowed them to disseminate their findings instantaneously to a wide, even global, audience. Their concerns ranged from the long-term viability of their revenue models to much more immediate threats to their survival: violence, lawsuits, denial-of-service attacks.

Over the years, CPJ has been documenting the changing landscape of threats against journalists.  Because the landscape of journalism is changing, the nature of the threats and the targets of attack are being transformed as well. Half of the 179 journalists currently in jail are online journalists, and new forms of harassment – like cyberattacks on news sites, fake websites set up to smear the reputations of journalists or threats via SMS or social media– are being reported.

Carlos Dada, editor of the independent El Faro news site in El Salvador, knows that only too well. He has been targeted by fake websites smearing his reputation. He and his staff have received threats, and at one point, they were under police protection. In the past months, Dada says , their reporters sensed they were being followed and photographed. He told CPJ they were probably being shadowed by the police who wanted to identify the sources of an El Faro report, published last year, on the Texis cartel, a criminal network that supposedly involved politicians, judges, tax auditors and businessmen.

That story was an amazing piece of reporting: It detailed the structure of the cartel, named the people behind it, showed how they laundered their profits and traced “El Caminito,” the route they used to transport cocaine from the north of El Salvador to the Honduran border and then to Guatemala. Three El Faro reporters worked on the article for four months, doing extensive interviews with government, police and intelligence officials as well as researchers who had worked for the U.S. Drug Enforcement Agency. They also obtained classified intelligence reports and visited the transport route themselves. They found that the Texis cartel was a free agent that offered their network to whoever was willing to pay. The report even identified the cartel’s leadership by name, including  “Chepe Diablo,” a prominent hotelier and president of the first division of Salvador soccer. (A video version of the report, El Caminito (The Little Pathway), is on You Tube.)

Last month, El Faro reported a secret deal between gangsters and the government (see previous post). Shortly afterward, the security minister warned El Faro staff that they were in danger of being attacked by the gangs but gave no details. The reporters were confused by the minister’s warning. Was it intended to silence El Faro, editor Carlos Dada wondered, or were the threats real?

Organized crime is THE story in El Salvador, and El Faro has covered it more boldly and innovatively than anyone else there. Last year, it opened a new section exclusively devoted to violence and organized crime, but in long form narratives. As Dada wrote in ReVista, the Harvard Review for Latin America, “We became convinced that journalism’s only morally valid answer to the security crisis in El Salvador is precisely through long formats, which require the application of both journalistic and academic methods to understand what is happening. Only that contextual understanding can explain the crisis to our readers.”

This deep, contextual reporting is one reason El Faro stands out, its influence greater than its size – the news organization has only 15 reporters and just 100,00 hits a week. Yet, it breaks original stories that are carried beyond El Salvador. Two years ago, Dada tracked down a former former Air Force pilot and death squad member who took part in the 1980 assassination of the Salvadoran archbishop Oscar Romero and got him to tell his story. His piece, “How We Killed Arhbishop Romero,” shed light on a murder that still resonates in the memory of Salvadorans and of many others caught in the maelstrom that was Central America in the 1980s.

So when the threats against the news organization became public, El Faro could count on an international community of press freedom advocates familiar with its work. They also had the backing of their readership. This is where Internet-based publications have the edge: Because they interact with their their readers at a deeper level, their audiences support them when they are threatened. Eventually, the concern from overseas and from local readers compelled the authorities to announce that they were committed to guaranteeing El Faro’s safety.

Public support is the ultimate line of defense. In order to survive, news organizations like El Faro need an engaged public that supports what they do: exposing corruption and the abuse of power and demanding accountability. “For such media to thrive,” says Dada,  “it is not enough to have these convictions and good journalists and editors to put them into practice. A good public is also necessary. We have a very demanding readership that has pushed us to constantly improve our work; a passionate readership that shows a much higher loyalty and sense of belonging than that of the mainstream media, constantly providing us with feedback through every possible way.”