← How to do investigative reporting in Pakistan
Leaner, meaner watchdogs →

Muckraking in digital – and democratic – Indonesia 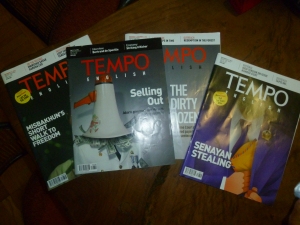 Last week, on a visit to the modest Jakarta office of the feisty Indonesian newsmagazine Tempo, I was told about one of the magazine’s proudest moments.

Now Tempo has a lot of proud moments. Founded in 1971 in the glory days of the Suharto dictatorship, it has always been an independent and credible voice. In 1994, in what would be later remembered as marking the beginning of the end of the Suharto era, the Indonesian information ministry shut down Tempo and two other publications for reporting on a government purchase of overpriced warships. Banned Tempo journalists helped set up underground newspapers, an independent journalist’s association to counter the government-sponsored one, and because the regime hadn’t yet figured out the internet, a site called Tempo Online.

Reopened in 1999, shortly after Suharto’s fall, Tempo remains the most influential and respected newsmagazine in Indonesia. But the country has changed. Indonesia is now a democracy with competitive elections and a rambunctious and free-wheeling press. It’s also in the midst of a digital revolution. The country is one of the fastest-growing mobile and tablet markets in Asia. Mobile-phone subscriptions are cheap here, with basic monthly data plans starting at $5, giving rise to what Tempo executive Bambang Harymurti calls “Facebook phones” – inexpensive handsets used mainly for getting access to the social networking site. It’s estimated that Indonesia will have 150 million people online by 2014, making it the 11th largest internet user in the world. Most of them will likely be accessing the internet through mobile devices.

While the digital revolution is killing weekly newsmagazines elsewhere, Tempo remains commercially viable, thanks in part to Indonesia’s booming economy and expanding middle class. Moreover, Tempo is Indonesia’s muckraker par excellence, an outstanding example of the maxim that good journalism sells and the public is willing to pay the price (Tempo has a paywall on its site and sells retail issues of its magazine on iTunes and the Scoop Newsstand).

But that is not what makes its reporters especially proud. It’s this: Two years ago, they said, Tempo led its latest edition with a hard-hitting exposé. Citing documents obtained from a government insider, the magazine reported that six top police generals had millions of dollars in their bank accounts. It named the officers and said that they could not have legitimately amassed those millions in a country where police officials earn about $1,500 a month. They also showed pictures of the fancy houses and cars that the police officers owned.

The story set off a firestorm. Police corruption has long been the bane of Indonesia and the story confirmed what many citizens suspected. The day the issue was released, unidentified men bought all the copies available on the streets of Jakarta, intercepting delivery trucks as they brought the magazine to the stands. Like many other publications in Southeast Asia, Tempo gets to its readers through newsstands rather than subscriptions. Because street sales were blocked, said Wahyu Dhyatmika, one of the authors of the story, “we opened the paywall on our website. Then we spread the links on Facebook and Twitter. Some of our subscribers started distributing photocopies and then people were selling the photocopies in bus terminals and on the streets.” As news about the exposé spread, Tempo printed tens of thousands more copies to satisfy reader demand.

A few days later, two men dressed in black and riding tandem on a motorcycle firebombed the magazine’s office. Fortunately, they caused no damage except probably to the police, who were widely blamed for the attack. Undaunted, Tempo and other news organizations would continue reporting on police corruption in the coming months, as Indonesia’s revitalized anticorruption body, called KPK, went after the grafters, its campaigns against corruption widely supported by the press and the public. Last week, in a story that hit the headlines of the Jakarta press, a police general was arrested for receiving a $200,000-bribe to award a contract to an unqualified company.

Muckraking is alive and well in Indonesia. Fourteen years after Suharto’s 30-year reign, the country’s press seldom holds its punches and believes that its role is to hold power to account. The press – with the exception of television, which is owned by an entrenched oligarchy – has emerged as an important pillar of Indonesian democracy, supporting the work of reform-minded officials and institutions like the KPK.

Some of that can be attributed to the DNA of publications like Tempo and DeTik, one of the magazines banned in 1994 and resurrected as a website that is the number one news site in Indonesia today. Having been shuttered by dictatorship, these organizations have a stake in their country’s fledgling democracy. They have also have a tradition of exposure and fighting back.  The strength and innovativeness of these institutions make them solid pillars of Indonesia’s free press. They are credible – and financially viable – watchdogs in a young democracy plagued by corruption and sectarian strife. They are anchor institutions that influence the kind of journalism that will prevail in digital Indonesia.

Tempo resumed publication in 1999, shortly after Suharto’s fall, and listed itself on the stock exchange in 2001. Today 40 percent of Tempo’s shares are publicly owned, 30 percent remains in the hands of the original owners, and the remaining 30 percent is owned by the Tempo employees’ foundation.

Tempo magazine has a six-person investigative team that puts out well-researched stories on corruption, crime and political wheeling-dealing. Every month or so, it releases an investigative package that runs about a dozen pages long, tackling issues with a depth uncommon in Indonesia’s sensational press. On my visit to the Tempo office, I spoke to reporters who had worked on such topics as judges who accepted bribes to reduce the sentences of drug lords, the flow of money in the recent elections for Jakarta governor, legislators demanding kickbacks to facilitate the release of funds from the government budget, and a Jakarta kampung (village) where heroin, ecstasy and other drugs were being openly sold.

Apart from the magazine, the Tempo company has a daily newspaper, a 24/7 website called tempo.co, a lively presence on social media and an institute that does training. Together with the radio network KBR68H, it recently set up Tempo TV, an internet-based TV and documentary production company that hopes to challenge the stranglehold of a few political and business families over Indonesian television. Tempo TV produces five hours of programming a day, including an investigative program called Saga, and its content is carried by 56 stations throughout Indonesia. TV is a business for deep pockets, but by going through the internet, Tempo did not have to invest in a transmitter, while producing high-quality content that Indonesian television sorely needs.

I was in Indonesia to attend the biennal Media Forum hosted by the Media Development Loan Fund. During that forum, Harymurti listed the challenges and opportunities Tempo faces. The pace of change is fast, he said. “Indonesia is a large country, the free media is a recent development, and the media was highly regulated, and liberalized only since 1999. Media penetration is still low, so there is room to grow.” Tempo is still figuring out what the growth in digital and mobile means and how to monetize it. “Our challenge,” he said, “is how to stay on the crest of the digital revolution, how to remain on top, not ahead, of the wave, so we don’t crash.”

But even as technology is upendig the media landscape, problems from the analog era remain. Tempo is like the canary in the mineshaft; its struggles are a sign of how well the free press is faring in Indonesia. Some years ago, Tempo successfully fended off a libel suit, with the high court overturning then-editor Harymurti’s libel conviction for a story that linked a fire at a public market to a Jakarta businessman.

In addition, Tempo reporters express frustration with the unwillingness of government agencies to release records, despite a newly minted freedom of information law. They say that something as basic as property records,which are public and routinely released elsewhere, are difficult to get, requiring the use of connections and fending off demands for grease money from corrupt bureaucrats.

As in other places where information access is constrained, reporters rely on documents provided by rival factions or insiders and whistleblowers. “It helps that people come to us with information because they trust us,” said Yuli Ismartono, who edits Tempo’s English edition.

As Tempo rides the digital wave, that trust may be its most important asset.