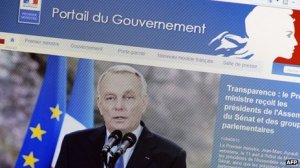 About a third of all countries in the world now require officials to publicly disclose their assets. Institutions like the World Bank and the OECD see this as a good thing. Asset declarations, they say, are crucial tools for fighting corruption and holding officials accountable. As an investigative journalist in the Philippines, I found asset statements vital to digging into conflicts of interest and the illegal accumulation of wealth by those in public office. Asset statements are mother lodes of information – and journalists in Russia, South Africa, Bosnia and Thailand, to name only a few, have found them crucial to their investigations of official wrongdoing.

There is as yet no global consensus on the merits of asset transparency. Last week, Chinese authorities detained six anticorruption activists who had been demanding that senior Communist Party officials declare their wealth. The demands come in the wake of exposés in the U.S. press, including a report that recently won the Pulitzer Prize, on the billions – yes, billions – illegally amassed by the so-called Red Nobility.

But the pushback on official disclosures comes from an unlikely quarter as well. On April 15, President Obama signed a law that reversed a provision in The STOCK Act of 2012, which required members of Congress, legislative staff and senior officials of the executive branch to post their financial disclosures online. As my former student Sasha Chavkin pointed out in an informative piece for the Columbia Journalism Review, the 2012 law also came on the heels of scandal – a 60 Minutes exposé on insider trading by congressmen.

On April 15, for the first time ever, French government ministers were required to publicly declare what they own, in what has been called a historic Great Revelation or Le Grand Déballage. Like elsewhere, the demand for wealth disclosure was stoked by scandal.

END_OF_DOCUMENT_TOKEN_TO_BE_REPLACED 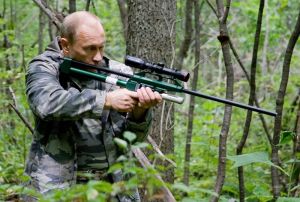 Putin aims a tranquilizer gun at a tiger at a nature reserve. Photo from premiere.gov.ru. (Creative Commons license)

Elizaveta Osetinskyaya, the editor of  Forbes Russia, the most prominent business magazine in that country, seemed to think so. It’s a paradox, she said. The Russian media is confronting some of the most formidable political and financial challenges it has faced since the fall of communism. Yet she thinks investigative reporting has never been more vibrant nor its quality better. “Nowadays you can’t hide anything,” she said,” the declarations of officials, their assets overseas, you cannot even hide your offshore accounts.”

“Second,” she continued, “Western [media] brands came to Russia in the end of the 1990s and the early 2000s, bringing high standards and technologies for investigative journalism. I started as a journalist in 1995. A lot of investigative pieces at that time came from leaks from oligarchs. This is not the way I would prefer to find information myself. Nowadays that is more possible than before. Third, despite more restrictive laws, there are now more clear and transparent rules [for businesses and for officials], such as international standards of accounting. Now we have a lot of databases. We have information about tenders. You can find a lot of information about the schemes of private companies. Fourth, there are a lot of independent bloggers who help us do our jobs.”

Osetinskaya was speaking at Columbia’s Harriman Institute, which brought in brought in five of Russia’s leading muckrakers in a forum last week. Put five Russian investigative journalists together in a room and you’re bound to have fireworks. The consensus: Vladimir Putin is bad news for for the Russian press. Since his election to a third term last year, the State Duma has recriminalized defamation and passed new laws that would authorize state censorship of critical websites. There is now far less tolerance for critical reporting than there was during the previous president, Dmitry Medvedev. At the same time, violent assaults on journalists continue.

So it was no surprise that others didn’t quite share Osetinskaya’s optimism. Elena Milashina has been for 16 years an investigative journalist for the independent newspaper Novaya Gazeta, where she continues the work of her slain colleague Anna Politkovsyaka, reporting on Chechnya and also investigating attacks on journalists. Last year, Milashina was attacked and beaten up by unknown men while on her way home. The beatings were so severe, she suffered a concussion, 14 blood clots and a broken tooth.

END_OF_DOCUMENT_TOKEN_TO_BE_REPLACED 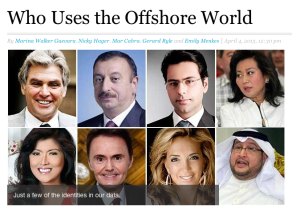 It’s possibly the biggest single leak of documents in the history of investigative reporting. This week, the Washington, DC-based International Consortium of Investigative Journalists released a series of stories based on 2.5 million documents that its director, Gerald Ryle, had obtained while he was still doing journalism in Australia.

In the last 15 months, 86 journalists in 46 countries have been poring over the document cache. ICIJ, housed in the Center for Public Integrity, coordinated the investigation from DC, using a secure messaging system  to communicate with a worldwide team of journalists and free- text retrieval software and programmers in three continents to mine the information from the documents (for more, read this account of how this amazing project was put together).

In recent years, there’s been great work done on the offshore economy, including astounding estimates made by economists, advocacy groups, international financial institutions and academics of the trillions of dollars of global wealth that is stashed in offshore havens. What makes the ICIJ’s exposé such a blockbuster, however, is that it names names, in effect puncturing huge holes in the armor of secrecy that makes offshore havens so attractive.

The ICIJ  reports this week expose an array of individuals, including politicians (everyone from  a Kuwaiti sheikh to Imee Marcos in the Philippines to members of the Azerbaijani ruling  family), businessmen, criminals, and even a songwriter and art collector who have stashed their assets overseas. Up  till now, those assets – at least those in 120,000 offshore companies and trusts now on ICIJ’s database – were cloaked in secrecy, kept away from the prying eyes of journalists, government regulators and tax collectors. But no longer.

Offshore companies are not illegal. There are legitimate reasons for housing a company offshore. But because offshore havens guarantee their clients secrecy, they have become natural havens for corruption, organized crime and tax evasion.

In a tweet last night, ICIJ said it is contemplating making a public release of its data. If that happens,  more secrets are likely to emerge as journalists and others who were not originally part of the collaboration dig into the data and find their own stories. This indeed could be bigger than Wikileaks’ “cablegate,” not just in terms of the size of the leaked documents (Wikileaks had about 250,000  US State Department cables) but also in terms of the international journalistic collaboration. (Disclosure: I am a member of ICIJ and my former organization, the Philippine Center for Investigative Journalism, was part of the Offshore Project). END_OF_DOCUMENT_TOKEN_TO_BE_REPLACED