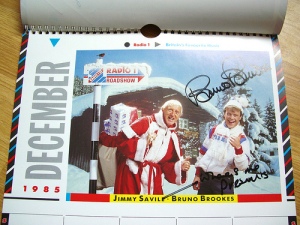 A 1985 calendar from the BBC shows the iconic TV host, Jimmy Savile, as Santa Claus. Savile died last year but has left the BBC mired in scandal after accusations of his serial sexual abuse came to light. (Photo from radiothings.com, Creative Commons license.)

Investigating sexual abuse requires a special set of skills, not least of them sensitive approaches to interviewing victims. Those who have reported on patterns of abuses have also used social-science methods, such as surveys and focus-group discussions. Others have mined public records, including court cases and crime reports, to get a sense of the magnitude of the problem. In some cases, news organizations and NGOs have published searchable databases that list the offenders and their crimes, drawing from documents released in the course of judicial proceedings.

In recent years, public sympathy for – and media scrutiny of – such abuses have encouraged survivors to break their silence and muster the courage to talk about what had been done to them. The curent controversy roiling the BBC is the most recent example. It’s now apparent that for decades, the celebrity TV presenter, Jimmy Savile, was a predatory pedophile and serial sex offender even as he was host of some of the BBC’s most loved TV programs. The BBC now stands accused not only of having blocked the airing of a program that exposed Savile, but also of a culture that condoned the TV icon’s behavior.

The Savile scandal – police say that they are looking at as many as 200 potential victims – has echoes of earlier stories, among others, that of Jerry Sandusky, the Penn State coach who was recently convicted of 45 counts of sexual abuse of young boys over a 15-year period. A decade ago, the Boston Globe blew the lid on widespread sex abuse by Catholic priests, setting off what is said to be one of the worst scandals that has hit the Roman Catholic church in 500 years. Since then, there have been exposes of similar patterns of abuse among Catholic priests in Ireland, Australia, Belgium and elsewhere.

In the 1990s, journalist Patrick Boyle found over 1,000 abuse cases in the Boy Scouts of America (BSA) by examining BSA records, court cases and news articles and interviewing more than 200 people. He wrote a book on the abuse, saying that the Scouts were a magnet for child molesters and pedophiles. Scouting abuse scandals continue: a recent court case in Oregon yielded a dossier on alleged abusers that was kept by the Boy Scouts and made public just last week (see Databases, below).

Some patterns emerge from past investigations of sexual abuse:

Below are some resources that will help journalists navigate this difficult terrain: