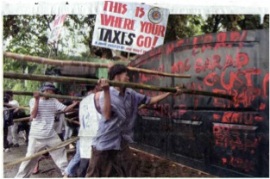 I didn’t know much about real estate until 2000 when my colleagues and I  at the Philippine Center for Investigative Journalism were checking out rumors that then President Joseph Estrada —  a former movie actor famous for his boozing and womanizing — was building fabulous houses for a string of mistresses. It turned out that the houses were just the most visible manifestations of the deep-seated corruption that was taking place during Estrada’s reign.

Since then, I’ve become house-conscious and have kept an informal tally of officials around the world whose crimes and misdeameanors have come to light because of their mania for mansions (cars are a close second, especially Ferraris and Bentleys, followed by private jets and yachts). Whether in the United States or Nigeria, South Africa or Bosnia, public officials have a penchant for using the people’s money to acquire real property. It wasn’t just Imelda Marcos who suffered from a publicly-financed edifice complex. (See my photo collection, Mansion Mania, on Pinterest.)