How to do investigative reporting in Pakistan

When journalist Umar Cheema launched the Center for Investigative Reporting in Pakistan (CIRP) last week, he did so with a bang: A blockbuster story that hit the headlines around the world. Two-thirds of Pakistani MPs, his report said, do not pay their taxes. Neither did President Asif Ali Zardari – famous for his spending sprees, polo games and luxurious country estates – and more than half the Cabinet.

One would think that given his history, Cheema would be more cautious about exposing wrongdoing. Two years ago, while driving home from a dinner, he was seized from his car by men in black commando garb. He was brought to a house where he was stripped naked, beaten and sexually assaulted. Unlike victims of similar abductions, Cheema spoke out and said Pakistan’s Inter-Services Intelligence (ISI) agency was responsible for the attack.

When I called him in Islamabad over the weekend, Cheema was still dealing with the furor raised by his tax story. He expected this. After all, he named names. In a 70-page booklet called, Representation without Taxation, which was released online and in a press conference last week, he listed all the members of Parliament who who didn’t pay any tax at all. He also published the names of those who had paid taxes in 2011 and the amounts they remitted to the government. 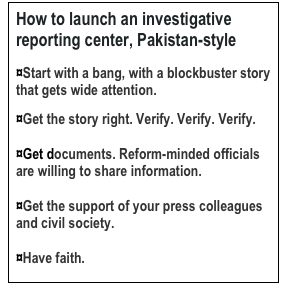 MPs roundly denied the charges and accused Cheema of being on the payroll of their rivals and of timing the report for the elections, which will likely be held in the spring. “The opposition and the administration have joined hands to wage attacks on me and malign me,” he said. But he could document each and every charge, including the last rupee of tax paid. It took six months, he said, to gather the information, verify and then verify again. He knew that he would pay dearly for any mistake. “We were doing naming and shaming,” he said, “and we had to be extra careful.”

As investigative reporter for The News, Cheema had taken on the military and the intelligence services and exposed Zardari’s corruption. Now he is on his biggest story yet.