How to investigate corruption in the courts 2

Just how prevalent is corruption in the courts? The closest approximation we can get is from a 2007 global survey by Transparency International. It found that 20% of African respondents who had interacted with the judiciary the previous year said they paid a bribe. For Latin America, the figure was 18%, and Asia, 15%.

These are rough estimates, but surveys are a safe and anonymous way to get revealing information about bribery in the judiciary. After all, few people openly admit to bribing judges. (A recent exception was Pakistan’s top real-estate developer, Malik Riaz Hussein. This past week, he provided journalists with evidence that, in order to curry favor with the Supreme Court, he had paid for lavish London vacations taken by the son of Chief Justice Iftikhar Muhammad Chaudhry. Hussein’s admission raised eyebrows in Pakistan: the charges, some journalists say, are part of a plot to discredit the independent-minded chief magistrate.)

Unlike the statements of self-confessed bribers, surveys have been less contentious. In Russia, the independent INDEM Foundation conducts annual surveys of “everyday corruption.” The 2010 survey found that Russians were most likely to pay small bribes to traffic policemen and to facilitate entry in publicly funded kindergartens and colleges. Bribes paid to courthouses were lower down the list, with the average bribe at less than $400. END_OF_DOCUMENT_TOKEN_TO_BE_REPLACED

How to investigate corruption in the courts 1 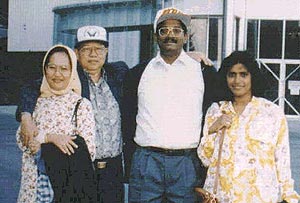 Damning photo: Tun Eussof Chin, then chief justice of the Malaysian Supreme Court (second from left), and his wife were photographed vacationing in a New Zealand ski resort with a prominent lawyer who had a case pending in his court. (From Malaysiakini)

This week,  scandals involving high court judges in the Philipppines and Brazil were in the international spotlight. On Tuesday, Renato Corona, the chief justice of the Philippine Supreme Court, was removed from office after having been found guilty by the Senate of failure to disclose millions of dollars in his bank accounts.

On Wednesday, The New York Times reported that high court judges in Brazil were alleged to have taken overseas trips on private planes arranged by opposition senator Demostenes Torres. The senator is said to be a “gopher” for Carlinhos Cachoeira, a powerful businessman and illegal gambling operator who is known as Brazil’s Michael Corleone. END_OF_DOCUMENT_TOKEN_TO_BE_REPLACED

How to hide your wealth 101

There is nothing more damaging for public officials than to have their secret and hard-to-explain assets exposed to the public. You’d think that they would have learned by now. And yet…

In the past weeks, I have been following from afar the travails of Renato Corona, the chief justice of the Philippine Supreme Court. Corona is in the midst of an impeachment trial and was found to have deposited millions of dollars in undisclosed bank accounts. As chief justice he should have known: Bank secrecy is not inviolable. As regulators worldwide crack down on money laundering and compel banks to be more accountable for their depositors, full secrecy is no longer guaranteed.

So here’s some unsolicited advice to those in public office: Be careful where you put your money. Be discreet about acquiring assets. Don’t be sloppy when you hide your wealth. Otherwise you’ll prove true what I’ve suspected all along: only the uninitiated and indiscreet get caught. END_OF_DOCUMENT_TOKEN_TO_BE_REPLACED