Ensuring a place for women

Last week’s post on the shortage of women in investigative reporting set off an animated online conversation, including a lively #sheparty Twitter chat organized a few days ago by the Women’s Media Center. On Twitter and blog posts, a number of women journalists pointed out the difficulties they face on the job, including the skepticism or protective instincts of editors who doubt their ability to tough it out. As Lyra Mckee recounted, a woman she was writing about, herself a feminist, wondered whether she had the what it took to go out drinking in bars to talk to sources. Others cited harassment or sexist remarks from male sources and male-dominated newsrooms where women find it difficult to speak out and be heard.

To be fair, while the world of investigative reporting is largely male, so are the media more broadly. The media also reflect the imbalance in the world outside the newsroom. Corporate boardrooms are even more skewed in favor of men – just 14% of executive positions in US companies are held by women. The academy is a bit better but it’s not a paradise of gender equality either. In 2005-06, women accounted for about 40% of fulll-time faculty in US universities, but only 25% of full professorships, according to a study by the National Educational Association.

Though more women than men now graduate from college, there are disproportionately fewer of them in the upper reaches of the professions, whether it’s law, medicine, engineering, business or government. What Esther Kaplan, editor of The Investigative Fund at The Nation Institute, wrote this week  –  “investigative reporting has somehow become a field like cooking, where many of the cooks are women, yet the top chefs are almost always men”  – is true of other endeavors as well.

There are historical, cultural and social structural reasons for such disparities. But the more interesting reasons have to do with the limits women have put on themselves and the self-perception that they are not as enterprising, as tough or as persistent as men. This is what Esther Kaplan said in her blog post:

When I first joined The Investigative Fund more than five years ago, almost every single one of our unsolicited queries came from men. Even very young men, straight out of college, had the chutzpah to propose ambitious investigative projects — never mind that they sometimes didn’t have any idea how to develop an actual reporting plan. Women, it seemed, didn’t have the same faith that they might be trusted to take on expensive, time-consuming reporting. It’s still not unusual for me to hear, when I reach out to a talented woman reporter with a potential assignment, “But I’m not really an investigative reporter.”

And here’s what Lyra McKee, an investigative journalist in Northern Ireland, wrote:

Are women journalists jettisoning their own careers by opting out of more challenging reporting? And if so, what can be done to challenge their perceptions of themselves and their abilities? END_OF_DOCUMENT_TOKEN_TO_BE_REPLACED

Is investigative reporting dominated by men?

The question was posed to me earlier this week by Philip Chamberlain, a journalism lecturer in the UK. His students, he said, seem to have this perception. His own informal survey showed that only about a third of the staff members of investigative outfits in his country are female.  And yet, in his classroom, as in classrooms of journalism schools elsewhere in the world, including my own, women outnumber men (in the Columbia Journalism School, the student body is two-thirds women).

For sure, journalism has come a long way since 1970, when the women on the Newsweek staff sued the magazine for discrimination. Newsweek at that time employed women as fact-checkers and researchers but not as writers or reporters, which were positions reserved for men. That’s thankfully no longer the case and women have since taken on high-profile media jobs. Still, in 2012, women made up just 37 percent of the staff of newspapers and account for only about a third of supervisory jobs, the Women’s Media Center reported last month. While a woman is now chief editor of The New York Times, the ratio of women in leadership positions in U.S. newsrooms has remained unchanged at about 30 percent since 1999.

So where have all the women journalism students gone? In recent years, more of them got jobs than men, said the Women’s Media Center report, which cited figures from the Cox Center at the University of Georgia. But women are more likely to end up in public relations and online news sites. Male graduates are more likely to pursue jobs at weekly and daily newspapers, wire services, television, radio and cable. 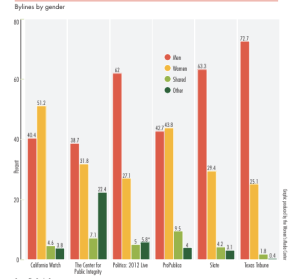 Source: Women’s Media Center, The Status of Women in U.S. Media in 2013

Are the numbers rosier in investigative reporting? Alas no. What data is available indicates that the composition of investigative staffs reflects the overall media picture. For sure, we’ve seen the proliferation of independent, nonprofit watchdogs, some of them founded by women. But even there, men – especially white men – dominate. The world of watchdogs is hardly reflective of the diversity of the real world.

The Women’s Media Center monitored the bylines in six online news sites in the second half of 2012. It found that women’s bylines outnumbered men’s in California Watch and Pro Publica. But in four of the others, as you’ll see in the graph, the ratio is reversed. The top executives of all four of the investigative nonprofits included in the study are male.

The same is true of the vast majority of members of the Investigative News Network, which is composed of nonprofit news organizations focused on accountability and public-interest reporting. For sure, INN’s membership is diverse as it counts both big and small newsrooms in the U.S. and Canada doing local, state, national and even international reporting. But only 25, about a third, of the 73 member organizations listed on the INN website have founders, executive directors or chief editors who are women. These nonprofits have been the sites of innovation and entrepreneurship. But they are far from being poster children for diversity.

[CORRECTION: A recount of members listed on INN’s website shows 28 out of 73  INN-affiliated organizations led by women; that is, their names are at the top of the masthead.  I missed three. Kevin Davis, CEO of INN, says that as of March 12, INN will have 78 members, of which 33 or 42% are, by my definition, led by women. Kevin, however, says a more accurate count should include groups where women are managing directors or in other very senior positions. In this case, the number would be 37 of 78, about 47%.]   END_OF_DOCUMENT_TOKEN_TO_BE_REPLACED